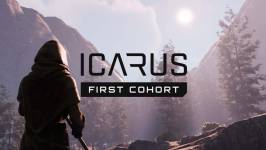 ICARUS is a session-based PvE survival game for up to eight co-op players or solo. Explore a savage alien wilderness in the aftermath of terraforming gone wrong. Survive long enough to mine exotic matter, then return to orbit to craft more advanced tech. Meet your deadline or be left behind forever.

The classic transport simulation genre has a new gold standard with Transport Fever 2. Discover a whole new world by navigating transport routes through land, water and air. May progress and prosperity find their way.

NHL 17 introduces three new modes that connect you to the sport to live out your hockey fantasy. The new Draft Champions mode introduces the fantasy draft with fast rounds of superstar picks. For the first time in EA SPORTS NHL history, the World Cup of Hockey game mode lets you take to the ice on a global stage and compete with your national hockey heroes. The next generation of Be a GM introduces Franchise Mode where you answer directly to the owner and take total control of the team and the business, from fan concessions to promotional nights to the arena and city you compete in. NHL 17 also brings gameplay control over every inch of the ice. The new Net Battle system lets you fight for that critical space in front of the crease on offense and defense. Authentic goaltenders both look and play the part with true-to-life stances and smarter Reactionary Save Intelligence that lets goalies read and react with an athletic save or get big with the body to block the puck. Improved hitting, passing, puck pick-ups and skating let you own every zone and dozens of new goal celebrations bring the crowd to their feet making your biggest moments memorable.